Disney World with an infant – a new experience 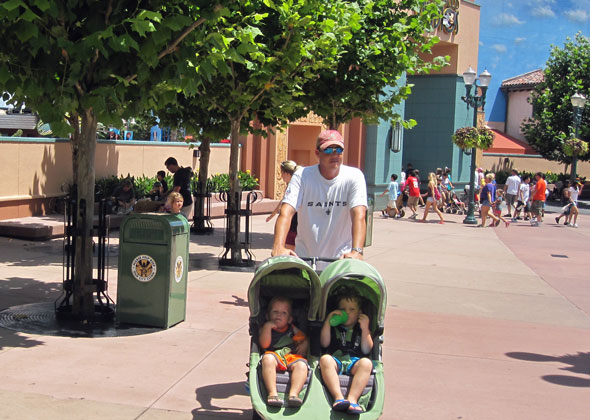 When we announced we were going to be taking our 6 month old baby to Walt Disney World, a few people asked why we’d include an infant on such a trip? She won’t remember it, they said. We replied that she may not, but we would, and we’d have many wonderful photos to show her when she’s old enough, though in reality she’d likely be taking a nap in many of the pictures.

With the trip now behind us we don’t regret it one bit! We have many fantastic memories, and hundreds of photos to share with her in years to come. I think it actually did her good and helped with her social skills too. She met so many new people, made friends and had a fantastic time!

It’s by no means easy though! Having been used to visiting WDW (as well as Disneyland California and Paris) many times before, doing as we wanted, when we wanted, staying out late and everything else you do as a carefree adult, it can be a bit of a shock to have the restrictions an infant brings. The key is to go with a totally different mindset. You’re not going to be able to ride all the “e-ticket” rides. You’re not going to be able to stay out late at Pleasure Island. You will have to keep stopping every half hour to feed or change the baby. You may only get a handful of rides done each day. But you will enjoy it. Just relax, take things easy and go with the flow. 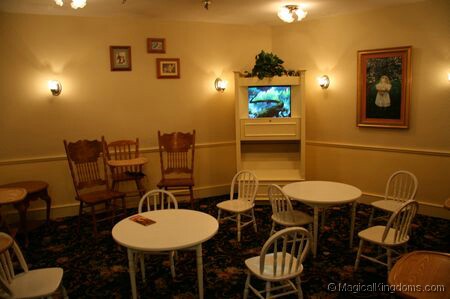 There’s a secret haven in each park. Somewhere that most childless guests aren’t aware exist. They’re called Baby Care Centers and they’re a lifesaver for those travelling with tots. Nestled away next to the first aid centers, they are somewhere parents can escape to to change, feed or just have a break in quiet air-conditioned comfort. Equipped with highchairs, rocking chairs, changing tables, microwaves, and private nursing rooms. They also stock a range of baby food, diapers, and other baby essentials, but expect to pay a little more than you would in your regular supermarket. The only snag is there is only one center in each park, and if you’re on the other side of the park it can be a bit of a trek, especially with a screaming baby.

Changing tables are available in all women’s and some men’s restrooms. Make sure you have some sort of disposable or fold-up changing mat with you, as the changing tables are either stainless steel or marble, which are both cold and hard, and not pleasant for a baby to lie on. 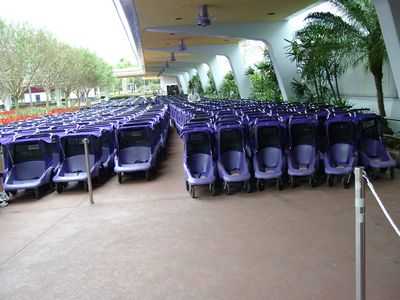 A major thing to consider is strollers. Do you take your own or hire one? Disney hire out single or double strollers, but have just raised the prices considerably. Singles now cost $15 a day, with doubles weighing in at a whopping $31 per day. If you’re staying for any length of time it would actually work out cheaper to buy a cheap stroller just for the trip. However, most airlines will carry a collapsible stroller for free, in addition to your regular luggage allowance, so just bring one from home. Lightweight umbrella strollers are the best type to use, especially if you intend to use the Disney transportation system, as you’ll have to fold the stroller up on board buses.

You can’t take strollers into any rides or wait/queue lines, and a front baby carrier can come in useful here with a young baby. Be aware that where you leave your stroller on entering an attraction may not necessarily be where you’ll find it when you exit. Cast Members often move strollers to a different place or even different area, so don’t panic thinking someone has walked off with yours! Having said that, it does occasionally happen, but there are things you can do to reduce the risk. Write your name on a piece of paper and put it inside your stroller, preferably somewhere visible like a clear plastic pocket if it has one. Tie brightly colored ribbons to it, or anything that make it easily identifiable which will put someone else wandering off with it.

Lots of great info in this video as well!

So, which rides can you go on with an infant? Well, you are a bit limited but there are still plenty of attractions you can experience.

Epcot
Spaceship Earth
Ellen’s Energy Adventure
Honey I Shrunk the Audience
Journey Into Imagination with Figment
Living with the Land
Circle of Life
The Seas with Nemo & Friends
Turtle Talk – With Crush!
All World Showcase attractions

If you’re worried about baby crying in the middle of a show, try to sit on the end of a row near the exit for a quick getaway if need be.

If you still want to ride the non-infant friendly rides, make use of “baby swap.” Simply enter the queue area as normal, infant too. Tell the Cast Member that you want to use baby swap. When you reach the front of the queue one of you will ride while the other stays with baby. Once the ride is over you simply swap round and the other one rides without a wait.

When you book your hotel, request a pak ‘n’ play crib, and request again at check-in. Disney Resorts provide these free of charge. You’ll also find high chairs in all restaurants and food courts.

So there you have it, a brief guide to taking your infant of it’s first Disney trip. It requires more work and planning, but is well worth it. Go and enjoy, before that cooing baby grows up and starts demanding to go on small world for the fifteenth time, and wants every plush toy she sees!

Another great resource for visiting Disney World resort with and infant, baby or toddler is here! Additionally, this page offers 20 tips for Disney with a baby and my favorite was the advice to buy a stroller cover-up and fan to make your infant considerably more comfortable in the heat, especially during nap-time! They also recommend having a stroller that will lat flat.

41 thoughts on “Disney World with an infant – a new experience”